"Seeing in a different light"

https://logehiram.org.uk/index-eng Established in 1899 in London, the Hiram Lodge is the first liberal lodge in Britain. The Lodge belongs to the Grand Orient de France, and receive all the men and women who wants to work together to the improvement of the Humanity.

(Website link not available) Freedom of Conscience Lodge.  A Grand Orient lodge which works the French ritual in English.

https://lodgethewhiteswan.org "The White Swan Lodge, No 1348" is a lodge of St John of the Grand Loge de France working in French in London, Uk.The Grand Lodge of France was lawfully established by at least three lodges coming from a regular Grand Lodge. It is truly independent and self-governing, with undisputed authority over Craft or basic Freemasonry (i.e. the symbolic degrees of Entered Apprentice, Fellow Craft and Master Mason) within its jurisdiction and not subject in any other way to or sharing power with any other Masonic body.  It mostly works the three Craft (Blue) degrees of the Ancient and Accepted Scottish Rite (A&ASR). Its members and visitors are men only.

GLTSO lodge REUNION FRATERNELLE ET TRADITION  remains committed to the initiatory aspect of Masonry, the rigorous practice of rituals, the study of symbols, the spiritual perfection of its members, the fraternity with all masons, whatever their membership. His works take place under the auspices of the Great Architect of the Universe.

It does not opt for a direct intervention in political life and "civil society", but enjoins its brothers "to carry among the other men the virtues they promised to set an example". On the other hand, it participates in Masonic humanitarian works, because "beneficence" is an essential duty of the Mason to the RER. Exclusively male by historical tradition, it nonetheless counts among the Obediences it recognizes, mixed or feminine structures: the Grand Lodge of France, the Human Right, Grand Lodge Mixed of France, Grand Lodge Feminine Memphis Misraïm and the Grande Universal Mixed Lodge.

The Martinist Tradition emerged in 18th century France during a period of significant expansion of esoteric and philosophic enquiry. It began as a system of philosophic thought. Some histories trace its roots further back to 17th century Rosicrucianism and 11th century Constantinople. The term Martinism was not used until the late 19th century and is a collective term for the movement as a whole.

The Order of the Round Table in England

To promote the development of young people in achieving their full physical, intellectual, social and spiritual potential as individuals, responsible citizens and as members of their local, national and international communities.

You will find some general information such as history, what the difference is with other forms of Freemasonry, but also a list with organisations that are active in every country that I could find information about in the world. The information is short, but (if available) provides a link to the organisation.

Lunchtimers was formed in London on 3rd March 1995 and exists...
"to extend the hand of welcome and fellowship to all those with a genuine and positive interest in Freemasonry regardless of gender, creed or any other characteristics".

The Masonic Study Society was established in 1921, at the instigation of J.S.M. Ward, to study the symbolism of Freemasonry in its various Degrees and to investigate its origins and meanings on anthropological lines. Special attention is devoted to the symbols and the mystical meanings of the various Degrees

Those aspects of Masonic research which are already dealt with by existing research bodies are largely avoided and an endeavour is made to study the Craft and Royal Arch in particular in the light of similar systems, past and present, and on the lines of comparative religion, anthropology and folklore. In short, the Society studies Freemasonry as a living organism, as well as on the basis of its documentation.

The Masonic Magazine where Freemasons find educational material for Masonic lodge lectures and their daily advancement in Masonic knowledge after initiation. A free Encyclopedia of Freemasonry, a comprehensive tool for the Freemason looking for more light and an open door to the world of the Free Masonry for non-Freemasons.

The premier Educational Resource for the Freemason available in 5 languages

PS Review of Freemasonry has been established on July 17, 1996 and since then eminent Freemason Scholars, members of Quatuor Coronati Lodge 2076 United Grand Lodge of England, Australian and New Zealand Masonic Research Council, the Ancient Accepted Scottish Rite Research Society USA and The Philalethes Society USA, have published their Masonic papers on this site. 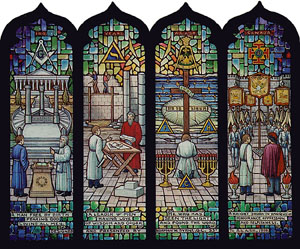 We believe that faith in God gives meaning and purpose to human life; that Masonry was, "the original network," of like-minded men who united in a common cause to share their opinions and work together on constructive projects. Now to complete this evolution, it must be transferred on a global scale to the internet.  The designs upon our electronic trestle boards will promote research and education and advance our historical foundation and rich cultural heritage.  Our mission is to clarify the present through appreciation of the past.

We believe that Freemasonry recognizes that times do change and we must grow with them.  Our roots are firmly planted in the Renaissance of the Dark Ages, but its branches extend into the future.  That future is one of technology, science, literature and music and is a course we as Phoenixmasons (e-Masons) are committed to shine "further Light" upon.  We believe in those solemn obligations taken at our sacred altar to provide for the less fortunate, exemplify patriotism, and perform the duties of citizenship.  Now, let us enjoy true fellowship attending this electronic educational resource while practicing its principles, tenets and beliefs; ever-remembering that it is the shared synergy of Brotherly Love and affection that heals us both physically and spiritually.

WHAT IS THE WINDING STAIRS?

The Winding Stairs is dedicated to helping you learn more about Freemasonry and to helping you become the best version of yourself. Through thought-provoking articles, podcast episodes, educational videos, and inspiring art, we intend to help you implement the life lessons you find in Masonry. We are passionate about the step by step journey to living a life worth emulating. Let’s walk together with a firm step and an illuminated path, as we continue our journey up The Winding Stairs.

The Masonic Round Table

The “Knights” of The Masonic Roundtable were assembled in February 2014 with the duty to spread Masonic light around the world.

The Masonic Roundtable is a weekly podcast panel of Masons from around the United States who discuss the latest and greatest in Masonic news, events, scholarship, and happenings. Join the conversation.

A web magazine about Freemasonry

FreemasonInformation is a Masonic web magazine for both Freemasons and those interested in the fraternity of Freemasonry.

* Previously known as the International Order of Co-Freemasonry.